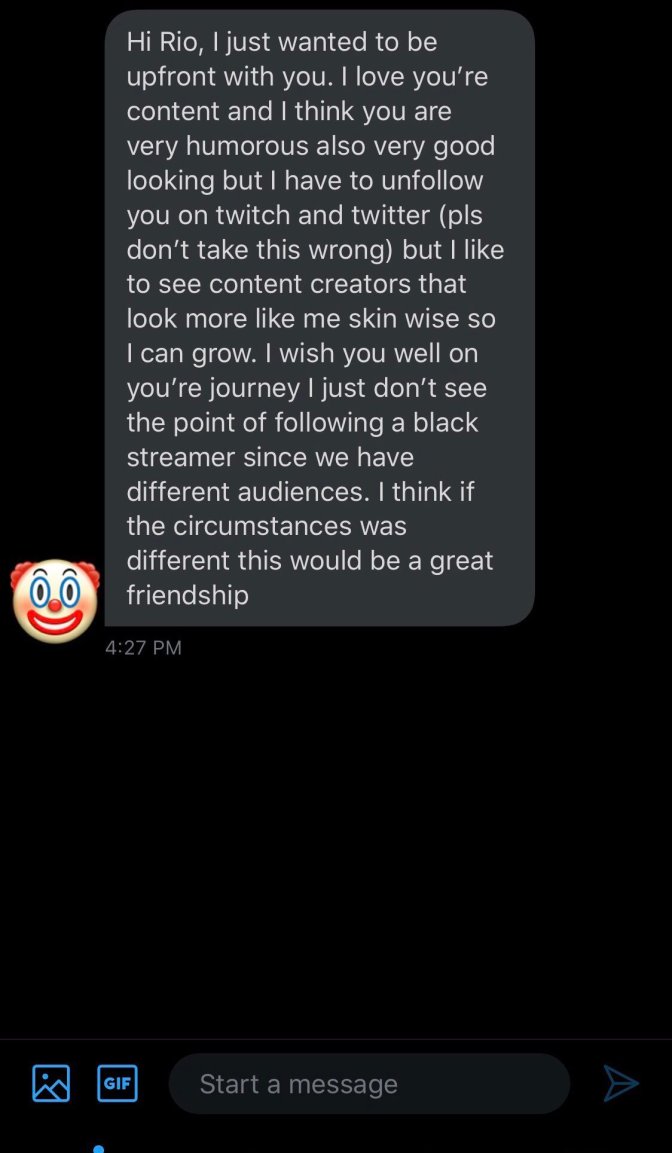 This is not me, but something I read on Twitter I felt needs to be shared.

So the OP (original poster) says they stopped following due to difference of audiences? So let me get this straight; you would rather follow the same group(s) of people who provide the same exact content instead of actually trying different things? Think for a minute – how boring would streaming be if everyone followed the same template? After a while, unless you already have a following, you won’t be recognized.

Second, your growth only comes from people of your nationality/skin color? So what does this say regarding who you are as a person? What does this say about your audience? Is there certain content you can’t provide because your audience is mixed and your concerned about backlash? Are you not willing to broaden your horizons as a content creator because you would rather stick to what works instead of taking risks to be different? Do your family pay the bills and forced you to act like this because of their beliefs?

To the OP – your bigotry is a big reason why certain streamers aren’t getting the support they need because you would rather stick to what you’re familiar with instead of branching out. In the business world, there’s no such thing as being selective, because at the end of the day you’re only cutting your own throat. Money isn’t picky, racist, selective, nor childish; so if you’re out to grow and make money, why should you be one of those?

To the person who received this message (Rio) – as a beginner streamer I’m also struggling to get viewers due to people like this because they think being selective will grant them what they want when in the long run they will die out. I’ve learned patience is 90% of all this, and I also learned being different will get you the right audience.

Look at big name streamers like PewDiePie, Ninja, Markaplier, etc and tell me they got big through only networking through their own people. Here’s a secret – they didn’t. They knew their audience, and stuck with what works. Some big names gotten too big, and ended up losing sponsors (like PewDiePie), however they didn’t just stick to one type of audience their entire run.

The big take a way from this – stupidity will only get you as far as it will let you. If you want to be big, branch out and network; not pick and choose for the wrong reasons.